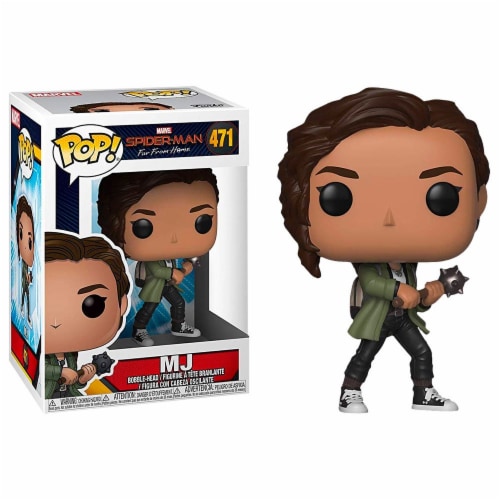 Spider-Man: Far From Home - MJ Pop! Vinyl Figure Spider-Man Homecoming was one of the true delights of 2017. The film was the second Spider-Man reboot, focusing on Tom Holland"s portrayal of Peter Parker as he tries to balance high school life with being Spider-Man, while facing the incredible Vulture, played by Michael Keaton. Well now anticipation is building for Spider-Man: Far From Home, so what better time than now for Funko to release this new wave of Spider-Man Pop! Vinyl Figures?! The new film is set following the events of Avengers: Endgame, where Peter Parker goes on a school trip to Europe with his friends. While abroad, he is recruited by Nick Fury to team up with Mysterio to battle the Elementals. This new wave of Spider-Man: Far From Home Pop! Vinyl Figure features several versions of our Spider-Man; we"ve got him taking a cheeky selfie, possibly with some crooks he"s just wrapped up in his web. We also get Spidey in his new black stealth From Spiderman far from home, Mary Jane, as a stylized POP vinyl from Funko! Stylized collectable stands 3 Â¾ inches tall, perfect for any Spiderman far from home fan! Collect and display all Spiderman far from home pop! Vinyl's!