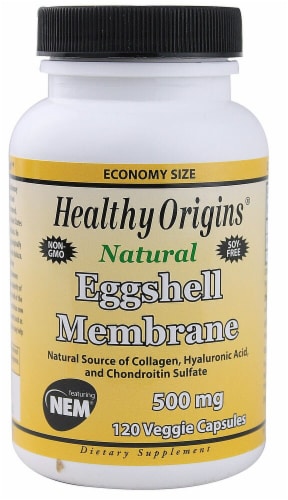 Healthy Origins Natural Eggshell Membrane is a revolutionary joint support ingredient from one of the world’s oldest food sources.* Eggs represent one of the most commonly consumed, prevalent, natural food sources on the planter. In the United States alone, over 50 billion eggs are consumed on an annual basis. No matter what form of egg product is consumed, that egg originally had a shell protecting the membrane, yolk, albumen, and chalaza. Until recently, the majority of eggshells were immediately discarded once the shell was broken and the yolk and albumen were extracted. What we failed to realize was that the majority of the beneficial egg membrane surrounding the interior shell of the egg was discarded along with the shell. Scientific research has now confirmed that these egg membranes contain components such Chondroitin Sulfate, Collagen, and Hyaluronic Acid which may help support healthy joints and flexibility.*