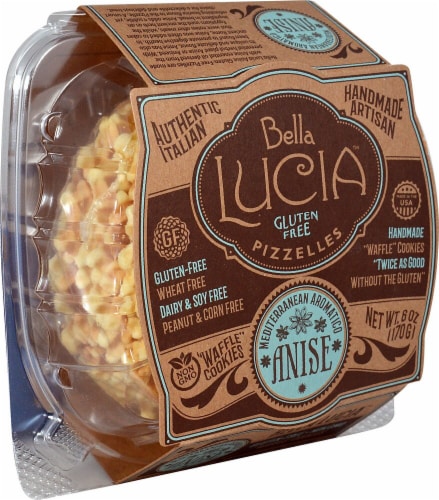 Bella Lucia Anise Gluten-Free Pizzelles are made with Anise essential oil derived from the perennial herbal plat Anise or Aniseed. With its unique and delicate flavor, Anise has also been found to promote digestive health. In ancient Rome, Anise was often added to cakes that were eaten after meals, while the Egyptians used the ancient herb as an ingredient in bread. Anise adds a subtle, yet refreshing licorice flavor to the Pizzelle. A smart choice for a delectable and delicious treat.

The name Bella Lucia which translates "Beautiful Lucy" was named after the owner''s late mother, bringing the authenticity of Italian heritage into the name and recipe. Bella Lucia was founded in 2009, with the belief that there is a better way to eat Gluten-Free without giving up flavor and taste. Merging traditional baking with new dietary needs; these hand made Pizzelle "Waffle" Cookies are "Twice as Good Without the Gluten".